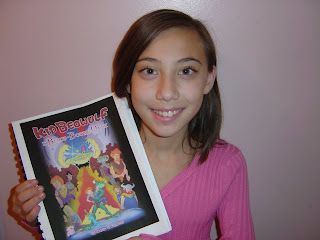 Since Kid Beowulf is aimed at the whole family, I thought I would invite my daughter to read the comic book and write a review. What follows is the guest review written by Roxanna Nokes, 7th grade. -- RSN

I suggest reading Kid Beowulf because it relates to the mischief kids get into (especially middle and high schoolers), like spying and getting girls. My favorite character was Hrothgar because he really related to the kids nowadays too. My favorite part was the ending, when Hrothgar has the baby but he doesn’t know why it turned out so ugly.
I think that some parts were a little confusing. For example, when he was saying “Hel” I thought it was a misspelled swear word because it was sometimes used in a way a swear word was used. Also in the middle of the comic when it jumps ahead 3 years it was a little confusing because I didn’t know how the time went by so fast, but the blood oath was easy to understand.

I think Kid Beowulf is good for middle schoolers. Like I said before, we can relate to the mischief Hrothgar gets into. It isn’t too violent, and the language isn’t too hard. Though I’ve never read Beowulf, I’m planning to read it now.
Posted by Dr. Richard Scott Nokes at 3:13 PM