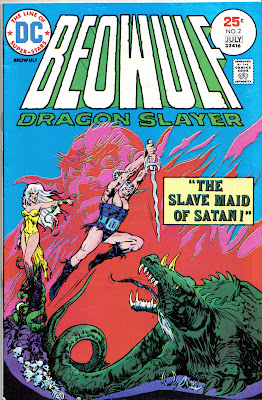 Synopsis: After having been magically spiriting into a swamp by Unferth, Beowulf and his three companions (Nan-zee, Wiglaf, and Hondscio) are attacked by Swamp Men as they sink deeper into the quicksand. On Nan-zee's advice, they allow themselves to be pulled under. Meanwhile, Grendel and his mother talk about their origins, as descendants of Cain and "Grebnel." Though mental telepathy, Satan orders Grendel to kill any he will at the Castle Hrothgar except for the King, Queen, and Shaper. When we return to Beowulf and companions, we learn the the quicksand was a gateway to the underworld, so while they are safe from the Swamp Men, they are now in Hell. They are immediately set upon by "Medulus," Satan's three-headed watchdog, which Beowulf kills with his minotaur helmet. After sleeping (during which time Nan-zee teaches Beowulf "the art of softness without weakness"), they are attacked by various demons, until they come into the presence of Satan himself, who tells them that he has instigated all this trouble out of boredom, as a game. Beowulf kicks Satan in the ear, and Satan magically spirits them out of the underworld. Meanwhile, Grendel attacks Heorot mead hall at the Castle Hrothgar. Beowulf and friends rush up to find him, but just as Grendel prepares to ambush them, Satan orders him to return to the swamp. In the castle, Beowulf meets Hrothgar, Wealtheow, and Unferth. Unferth begins plotting more ways to kill Beowulf.

This issue is a lot sillier than the first one. For example, magic incantations are simply words spoken backwards, so in the first issue when Unferth magically sends Beowulf and company into the swamp, he says "Artsuh Taraz Hcarps Osla," "Also Sprach Zarathustra" backwards. Fair enough, I suppose ... but in the section issue, the Slave-Maiden of Satan issues forth her final magical curse, "Enoyna! Sinnet!" Yes, that's right, she curses them with the phrase "Tennis, anyone?" backwards. Oh, woe unto any who find themselves invited to a tennis match -- in HELL!

Then there are things that just don't seem to make any darn sense. For example, Beowulf fights the three-headed watchdog with his helmet after complaining that he doesn't have any way to sever the dog's heads. Apparently, his sword has gone missing, and it doesn't appear in any of the panels. Then, he suddenly has the sword again for the rest of the story. Also, there is the idea that they are saved from the Swamp Men by being sucked into Hell. Um, isn't Hell by definition worse than any swamp? At least in the swamp there were a finite number of Swamp Men, as opposed to an infinite number of troll-demons in Hell.

But the silliest moment of all is when Beowulf gets angry that Satan has described them as "toys," so he kicks him in the ear. Kind of makes the Harrowing of Hell seem a lot less difficult when you can wander into Hell and kick Satan in the ear. Please note, too, from the panel, that Satan is a whiner. 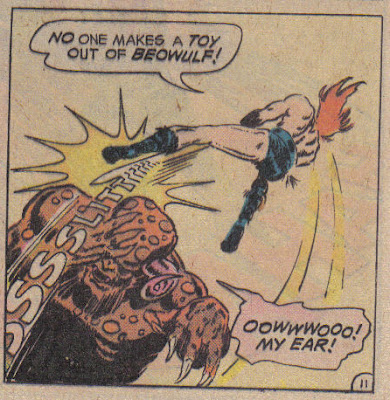 Also, disappointingly, the writers seem to have given up on alliteration for the Shaper, and instead have him speaking in rhyme:

They ride the tide of heroes' seas to free a shore of the oppressed!
Those cast aside unchain their pride and put them through death's
test!
A spell is weaved, the die is cast, the battlers breathe their last!
A costly cost if all are lost, a blot on Daneland's past!

The previous alliterative poem was nothing great, but the meter here is terrible, and it gives us the wonderfully craptastic phrase, "costly cost." Yeesh! Let's hope they return to alliteration; they were better at it.
You can find the previous post in this series here.
Posted by Dr. Richard Scott Nokes at 9:07 AM