This year I didn't get a lot of medievalist gifts (I'm now at that age when I'm genuinely excited to get socks) but Santa's elves did make me something special at his workshop: A custom-made chainmail bow tie. 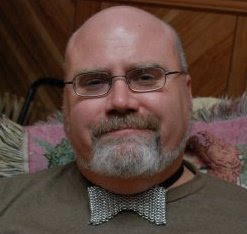 Of course, this was quality elf workmanship (workelfship?), but if you like what you see here and want something similar, I've heard rumors that Chained Elegance consults with the North Pole. They're the same outfit Allegra Torres gets her stuff from.

So what about all of you? What exciting medievalist gifts did Santa bring you? Any cool new books? Games? Recreational garb? If it's something that has to be seen to be appreciated, go head and send me an image and I'll try to post it.
Posted by Dr. Richard Scott Nokes at 7:13 AM 2 comments:

Medieval News has the top 10 medieval news stories of 2009, and here are all the Ancient/Medieval Carnivalesques of 2009:

Getting Medieval has a nice post on medieval Christmas.
Posted by Dr. Richard Scott Nokes at 8:07 AM 1 comment:

Someone who really hates high taxes:

Berlusconi has learned the hard way -- never turn your back on a medieval cathedral, or even a replica of one. Here's more on the actual cathedral itself.

Perhaps Saint Ambrose is unhappy about something?
Posted by Dr. Richard Scott Nokes at 7:21 AM 1 comment:

Got Medieval has the saints up for the first half of December, including one particularly famous one you may have heard of...
Posted by Dr. Richard Scott Nokes at 12:29 PM No comments:

Update on the CRU Scandal and the Medieval Warm Period

We’ve now heard back from the Wordhoard’s resident Science Dude* on his review of the CRU e-mails and the kerfuffle they’ve caused. In addition to the e-mails, he’s looked at some of the published results that came out of them. As promised, I report to you his findings.

Some of the public sturm und drang over the e-mails is over things that are either misunderstood by laymen or simply the casual way that two academics might talk with one another over presumably private e-mails. For example, a lot of cry has gone up over the sentence, “Next time I see [prominent global warming skeptic] at a scientific meeting, I’ll be tempted to beat the crap out of him. Very tempted.” Well, heck, there are some colleagues in my own field I’m tempted to beat the crap out of, and I wouldn’t be surprised if I had expressed that in an e-mail to a friend. It’s the kind of thing you write in an e-mail to someone you know well, not the kind of thing you publish in a footnote.

Science Dude does find, however, that at many points the e-mails reveal “bad science,” “deception,” and academic bad behavior ranging from the “sloppy” to “beyond the pale.” Beyond the unethical behavior, he notes, there also appears to be illegal behavior in the requests to delete e-mails to avoid FoIA requirements, something that is illegal as “anyone getting grants at that level would know” ((though I should note he is Science Dude, not Legal Dude). Because you can’t really be fined or prosecuted for being a bad scientist, but you can be for violating the Freedom of Information Act, Science Dude says “I can also say I would rather be Michael Mann than Phil Jones right now,” and he notes that even the other participants in the e-mails are quickly distancing themselves from Jones – a very bad sign indeed.

To see “the most honest thing written” on the CRU scandal to date, Science Dude recommends reading Eduardo Zorita’s “Why I Think that Michael Mann, Phil Jones, and Stefan Rahmstorf Should Be Barred from the IPCC Process.” Science Dude notes that Zorita has probably done serious damage to his career by writing it – which also explains why I’m respecting Science Dude’s anonymity.

Now, for the part that affects us here at the Wordhoard – the Medieval Warm Period. In one now-notorious e-mail, Michael Mann wrote that “it would nice to ‘contain’ the putative ‘MWP’” (or Medieval Warm Period), but Mann has since argued that what he meant by that was that he simply wanted to identify exactly when the MWP began, not deny its existence. Science Dude, however, finds Mann’s explanation unbelievable, both in the context of the e-mail and Mann’s other publications. Read enough of what Mann has written about the MWP (or what he prefers to call the “Medieval Climate Anomaly”), and you’ll see that his explanation doesn’t pass the laugh test. Whether the MWP was just an anomaly or not, Mann clearly meant to hide it in the data.

At the end of the day, the requests by Jones to delete e-mails were not just probably illegal – they were also clear signs of conscious deception. At best they were like Colonel Jessep in A Few Good Men, shouting “You can’t handle the truth!” As Science Dude points out, deciding what the public can and can’t handle is “a dangerous business for scientists to get into.”

Even more troublesome within the scientific community is the reliance on the CRU for binned data. Binning data is a process that that’s intended to eliminate small observational errors, but it can be very computer intensive, so other scientists have been acting in good faith using the CRU’s binned data for their own work – but if that data was massaged to aim toward a particular end rather than eliminating error, the hard work of honest scientists has been compromised. Science Dude doesn’t have access to the unbinned data to compare with the binned data (nor would he likely have the time or resources to do so just as a favor to me) regarding the Medieval Warm Period, but the CRU scandal opens the possibility that some of what we think about the MWP will have to be revised as we get more honest data.


*Science Dude is a legitimate university scientist – millions of bucks in grants over the years, full professor, etc. He characterizes himself as a believer in climate change, and would not call himself an anthropogenic climate change “skeptic,” but notes that climate is always changing. He would argue that the question as to whether and to what degree human activity affects that climate change is uncertain.
Posted by Dr. Richard Scott Nokes at 10:04 AM 4 comments:

Here's an article about how a monk is preserving manuscripts digitally. Unfortunately, it's behind the Chronicle's subscriber firewall, but you get the idea.
Posted by Dr. Richard Scott Nokes at 4:58 PM 1 comment: