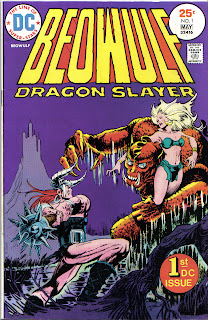 The monster Grendel rises from the swamps and attacks Castle Hrothgar, angry about the "sounds of life" coming from the men within. The scop (known also as "The Shaper") appears to Beowulf and through a cryptic prophecy tells him of the troubles at Castle Hrothgar. This same scop appears in Hrothgar's court and tells them of Beowulf's approach, just before Grendel's attack. Meanwhile, on the sea voyage to the Castle Hrothgar, Beowulf and his men encounter a beautiful siren luring them into the Underworld. Beowulf defeats the demons controlling the siren, and we learn that she is Nan-zee, a Swedish Scylfing warrior who is nearly Beowulf's match in battle. As Beowulf and his companions (including Nan-zee) approach the Castle Hrothgar, Unferth fears humiliation, and so he casts a spell that casts them into a swamp, where they are attacked by "Swamp Men -- Disciples of Satan!"
In this first comic, it appears that the writers are going to try to include some thematic elements from the Beowulf poem. "Wyrd" is referred to as "the God of Fate," Beowulf says that he will fight for "'lof,' or fame as some call it," and the scop appears to have some central role, though he becomes "The Shaper," rather than God. All that gets abandoned really quickly.
Beowulf himself appears as a sort of general barbarian figure, when we first see him, he is killing, and violence isn't just his main approach to any situation -- it's his ONLY approach. Consider the rather S&M way in which he woos the lovely Nan-zee: 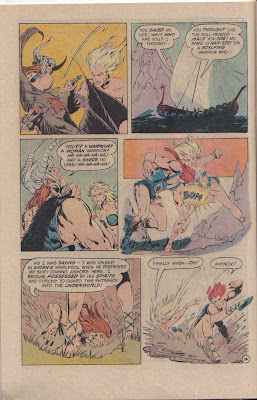 Not exactly the method I'd use, but it appears to work for him. Hey, are you a 12-year-old boy confused about girls? Here's some advice from DC comics: When you meet a girl you like, make fun of her and her nationality, then punch her into the mud.* Chicks dig that.

The idea of a siren is our first hint that this whole series is going to be a mash-up, mostly with classical mythology. As the series progresses, Beowulf encounters a whole bunch of non-Beowulfian creatures and situations. Nan-zee herself is a mash-up, since she is an Amazon-type siren/warrior (classical Mediterranean) rescued by a Geatish warrior (medieval Germanic) from her enthrallment by demons of Satan (Judeo-Christian).

The character of Unferth doesn't make any sense. First of all, his garb is quite strange compared to that of others, making him look like he's dresses as a lizard at a costume party (just in case you missed it, this is called "Beowulf: Dragon Slayer," hint hint). On the one hand, he's supposed to be a some kind of tough guy, but on the other we are told he is "arthritic." His role appears to be the all-purpose bad guy in Hrothgar's court.

Interestingly, this first book seems to have literary pretensions. Though the notes at the end contrast it with "Classics Illustrated" comics, the writers do refer to it as "educational" and "an Epic in Comic-Book form." Also, the scop at one point suddenly launches into a speech that uses alliteration, kennings and oral formulae:

The world-candle burns as the life-sphere turns; To Beowulf, boon of the Geats!
He swings his sword -- his iron-killer lord! His might explodes across this
blue-orb Earth, as rosy-fingered dawn brings peace to the land of his birth!

OK, Caedmon meets Homer it ain't, but you can see what they are trying to do. I wonder how many kids tried writing book reports based on the comic?

*UPDATE: After posting this, I realized that the image was not clear enough to read the page. Here are the six panels in the image:

Posted by Dr. Richard Scott Nokes at 9:14 AM