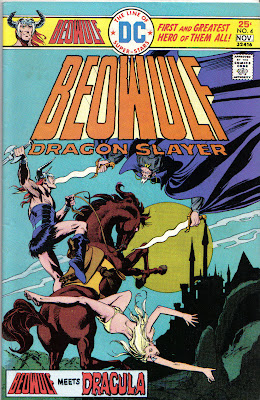 Synopsis: As Beowulf and his companions travel across the desert in search of the Zumak fruit (which Beowulf needs to defeat Grendel), they are set upon by a band of warriors who mistake him for Dracula. After a brief battle, the warriors realize their error and identify themselves as "The Ashers," the Lost Tribe of Israel. They are hunting Vlad the Impaler, who has been plundering the peoples of the desert and drinking their blood. Beowulf agrees to help them. Meanwhile, Grendel reminds Satan that his promise to allow him to fight Beowulf at the next full moon has come due. As Beowulf sits around the fire talking with the Rabbi of the Lost Tribe, the fire engulfs the warriors and shrinks them, sending them to Castle Hrothgar. After a discussion, it is decided that Wiglaf, Hondscio, and Beowulf will wait in the meadhall alone for Grendel. That night, Grendel bursts in and eats Hondscio alive. The battle is going poorly, with Grendel crushing Beowulf. Satan then magically whisks the warriors away to the desert, and Grendel is satisfied to wait for the final battle, knowing that he is supreme. Beowulf asks the Shaper to write of only one battle with Grendel in the poem, so that Hondscio will be immortalized as sacrificing his life for his comrades. At just that moment, Dracula and his men attack. The rabbi is killed. Just as Beowulf and Dracula meet on the battlefield, though, one of Dracula's men is possessed by the Devil and slays Dracula. Satan then announces that he has decided to make Dracula the "first of the Undead." Beowulf and the Lost Tribe, each having lost someone important to them, go their separate ways.

The phrase "jumping the shark" just seems inadequate here. First of all, it has become so cliche that I hesitate to use it at all. Second, the Fonz merely jumped over a single shark. Beowulf, in one issue, fought Dracula, met the Lost Tribe of Israel, and fought a losing battle with Grendel. Not even Abbott and Costello were this audacious in their series of "Abbott and Costello Meet ..." films. No, this goes beyond "jumping the shark."


I was struck by how theologically bleak this series is. Thus far, we have seen two gods: Satan, who is clearly a god of evil, and Wyrd, who is explicitly described as neither good nor evil. Where is the God of Good? In speaking to the warriors of the Lost Tribe, Beowulf says, "You may dress differently and believe in a different god, but we fight for the same cause." Yet Beowulf's god, Wyrd, is a definite presence, and his servants perform miracles (magic) using his power. Satan, the god of evil, can't help but pop into the comic all the time. Yet the God of the Lost Tribe either does not exist or takes no interest in the characters. When Satan summons Beowulf & friends through the flames, the Rabbi tries to counter it with a mystical chant ("Wen si esle tahw!") that fails to do anything. Satan, and evil, appear to rule essentially unopposed.

This issue also makes explicit the idea that these are the actual historical events, and that the poem as we know it is the fictionalization of the events, rather than visa-versa. Perhaps for this reason, the only parts of this issue that aren't absolutely ridiculous are the parts that come from the poem itself. The death of Hondscio, for example, is almost poignant. Nan-zee is neatly removed from that part of the narrative by simply having only Beowulf, Hondscio, and Wiglaf trapped by the magical fire. Then, when Beowulf decides to go face Grendel alone, Wiglaf and Handscio object, and Beowulf agrees to have them join him. The narrator says, "A strong claps of friendship and love by the three comrades -- and as their eyes dilate and redden, they know that never again will they all be together..." When we see Hondscio waiting alone, he contemplates his full life, and how much he loves his wife and children. The death of Hondscio, in the panels below, runs like this: 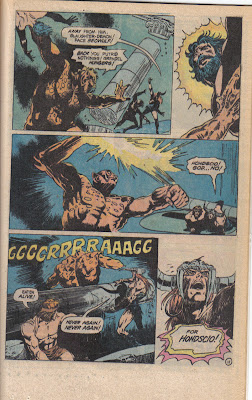 Then Beowulf is denied his action hero moment. In the ensuing battle with Grendel, he is clearly losing, and cannot win without the magical potions from Satan. Even then, he is only saved by the intervention of Satan, not because of his own virtue or strength. For the rest of the issue, even while Nan-zee is cracking one-liners during battle, Beowulf cries "For Hondscio! For Hondscio!"

In one last note: When the Shaper uses magic to fight in battle, the magic words are "Siht potnanoc eesstel!" -- another Conan reference.

The two words that best describe this issue: Bleak and silly, by turns. Unfortunately, mostly silly.