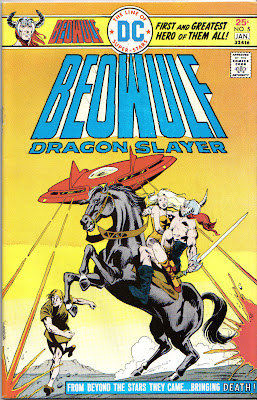 Synopsis: Beowulf and companions, seeking the nectar of the Zumak fruit, come upon a Stonehenge-style structure in a far-away land, presumably Central America as it is covered in Maya glyphs. Beowulf realizes that the monuments "must have been built to recive the chariots of the gods." A pair of mysterious druids suddenly appear and try to capture Beowulf. He and his companions do not do well in the skirmish, in large part because the Shaper's magic is unable to help them, being countered by "a more powerful magic than the world has ever known -- it is called 'Science'!" Unferth flees during the battle and encounters a flying saucer, where he makes a deal with the druid priestess to deliver Beowulf to them, after which time Unferth knocks Beowulf cold from behind during the battle. Beowulf and Nan-zee awake in the spacecraft, flying high above the earth. There they learn from the druid priestess that they have been capturing the greatest warriors on Earth for their gods, and are keeping them in the Chamber of the Sleepers (a kind of suspended animation). The priestess then shoots a beam to the earth to kill all of Beowulf's remaining party. Although "every piece of stone and bone and flesh" are turned into "nothingness," Beowulf's companions emerge with only minor injuries, but are immediately attacked and put in chains by unknown warriors. Beowulf asks about the Zumak fruit, but is told by the priestess that the gods gathered every last bit of it up for their own purposes. He then begins attacking the druids and damaging their ship, awakening all the sleepers, who revolt and defeat the druids. One Greek warrior in particular tells Beowulf that he has seen the Zumak in Crete. Just then, as they are preparing to set the spacecraft down on the continent of Atlantis, the two gods of the druids (and obvious aliens), Ishtar and En-Lil, arrive with ray guns and begin shooting. Beowulf manages to get one of the ray guns and shoots up the ship, causing a chain reaction. As the crashing ship shoots over the active volcano at the center of Atlantis, Beowulf, Nan-zee and the Greek warrior leap out onto the volcano. They race through the market-place of Atlantis, which by chance happens to be sinking at that moment, and manages to make it to a raft -- the only three survivors. The Greek warrior is identified as Ulysses [Odysseus], and the goddess Athena appears in the sky. Ulysses disappears back to his own time, where he will awaken remembering his time on the spacecraft was being spent prisoner on the nymph Calypso's island. Beowulf and Nan-zee vow to go to Crete for the Zumak, and then to return to Daneland to fight both Grendel and Satan.

OK, I am really, really regretting starting this series. I thought that the Dracula / Lost Tribes of Israel issue was over-the-top, but a new top had to be constructed just for this issue to go over it again. The plotline is so confusing that I can't even state for absolute certainty that the above synopsis is accurate -- I'm just giving the best account I can. The drawings, too, are rather confusing, so I sometimes couldn't figure out exactly what was happening. I've put off this installment until late Saturday night because I couldn't figure out any way to structure it -- so I'll just have to walk chronologically through it.

First off, we have the very early 1970s idea of the Chariots of the Gods. For those of you who are too young to know what this is (or just blessed with a sweet, sweet ignorance of crackpot theories), the reference is to a very popular book that claimed that aliens visited Earth's ancient civilizations and gave them technology and religion. Every unexplained glyph was interpreted as some sort of reference to alien technology, and every strange structure was some sort of navigational technology. This issue takes that idea and plays around with it. The "magic" of the druids is some sort of alien tech (Beowulf defeats one druid by short-circuiting his wrist-blasters), and Stonehenge (as well as the fictional Central American Stonehenge) is to guide the alien craft. One of my favorite lines in the issue is this:

Druid Priestess: Your stupidity astounds me! The Earth, like the Sun and the Moon, is round! And the gods built two "stanhengues" far apart for the purposes of triangulation!

Ahem, TRIangulation, with just two? Sounds more like BIangulation to me -- perhaps the alien gods would be wise to build another. We also get a note with the word stanhengues stating that it "is the Old Anglo-Saxon word for 'Stonehenge.'" If I'm correct (and I'm writing this from home, so it might be VERY wrong), that's a reference to Wace saying that the word "stanhengues" comes from Old French (or something similar). Do any Wordhoarders know the exact reference?

By the way, just in case you thought only the Maya were influenced by the alien gods, consider this image of them: 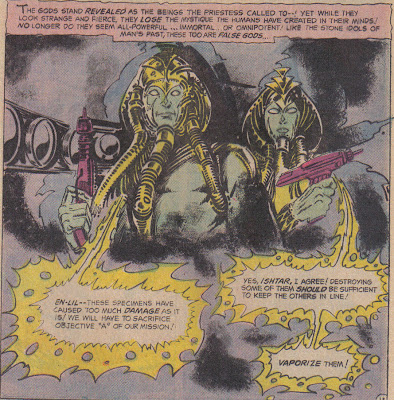 Not only are they pharaonic-looking, but they've got the names of Sumerian gods.

Magic and science also have an interesting relationship to one another. In my post on the previous issue, I remarked about the grim theology in which there appeared to be no god of goodness, only Satan (evil) and Wyrd (uncaring). Here, the Shaper is unable to work his magical incantation against the druids, "Tceffe nalsu ekim ayeh!"* Since the Shaper is the servant of Wyrd, the god of Fate, who we are told is more powerful than Satan (though the Shaper at one point refuses to work magic against Satan in a prior issue, apparently because it was not fated), this seems to suggest that science stands outside of fate, outside of destiny. I'm not sure what that means in the confused theology of Beowulf comics, but there it is.

I suppose what I found most annoying about this issue was that, in their desire to mash-up as many different things as possible, the writing makes no sense. OK, so I'll buy that Beowulf went to Central America, where "Far Eastern Druids" in service of alien gods try to capture him. But when a death ray shoots to the Earth and kills everyone standing around Beowulf's friends, and when we are both told and shown that everything there was obliterated, aren't we at least owed an explanation when only Beowulf's companions survive, and are not in any way visibly injured? I mean, at least let their clothes be torn or their hair be disheveled!

Again, let's say I buy that their alien spacecraft is crashing over Atlantis. I'm supposed to believe that Beowulf, Nan-zee, and Ulysses are able to leap safely from a moving spacecraft? It isn't like this comic book was written in the 1770s -- what do they think paratroupers bother with parachutes for? And they leap onto an erupting volcano? And are the only survivors on the continent? Just consider all of the unbelievably impossible things that happen on just this one page: 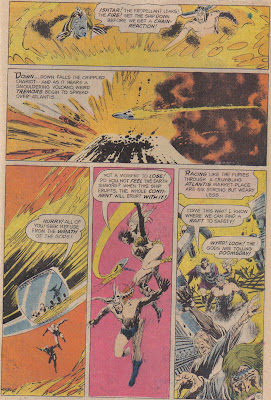 Sigh ... OK, so just on this page. The first panel, I'll buy. It's unlikely that the alien spacecraft would be quite so delicate and unsafe, but it's possible. The second panel too I'll buy -- it seems like its suggested that the spacecraft itself causes an already active volcano to erupt violently. Any continent small enough to be destroyed by a single volcano would not be a "continent" in my book, but I'll accept the idea that the word is used poetically to refer to a large island.

The third panel, though? The spacecraft apparently has a large, open window (which must make viewing easier, breathing more difficult)? They leap out as the spaceship is streaking across the sky. OK, now just the height alone should have killed them, but even if it were not very high, what about the speed? Even when I was a young kid of the comic-reading demographic, I understood that if I lept from my family's wood-paneled station wagon as it was barrelling down the highway, even though the drop was only about a foot, the landing would probably feel unpleasant. And, if the speed and height weren't enough, the artist draws flames below, so we know they are dropping right into the fires of an erupting volcano.

The fourth panel, then, shows us just how far they are dropping. They seem to be falling long enough to have a conversation. Ulysses is able to feel the ground shaking from mid-air, and also seems to have a basic understanding of a nuclear reaction (guess he had good tutors back on Ithaca). We have some missing action from panels 4-5, during which time they apparently land safely in the flames of the volcano and run down its side into the center of the city.

Why then are they the only survivors? Because Ulysses, who has spent the last few centuries in hypersleep aboard an alien spacecraft, knows where there is a raft that they can take to safety. Apparently, the Atlantians themselves were completely ignorant of where their port was, because none of them made it to safety.

All this begs the question: Why did it take Ulysses (Odysseus) so long to win the Trojan War? The Greeks could have simply catapulted him into Troy. He would have landed safely, and then could have set the city ablaze. He, being invulnerable to fire, would have remained unscathed, while the Trojans, not having any idea where the exits were, would have all burned to death. Then you wouldn't have any pesky Trojan diaspora to found Rome and Britain.

Seriously, though, what the heck is Ulysses doing in this issue? His only jobs seem to be to point out that centuries ago there were Zumak plants in Crete, and to show psychic knowledge of Atlantian raft placement.

Thank the alien gods En-Lil and Ishtar** that there is only one more issue to go -- I couldn't take much more!

*Mike Ulsan is the main writer of the comic.
**With special appreciation to Wyrd, without whom none of this would be possible.