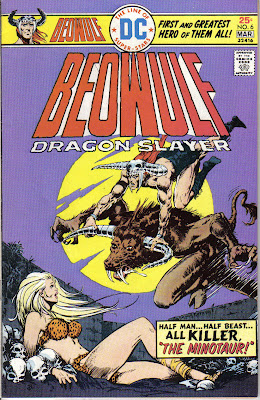 Synopsis: Having parted from Ulysses at the end of the last issue, this final issue opens with Beowulf and Nan-zee riding the raft from Atlantis to Crete, where they will seek out the sacred Zumak fruit. A supernatural storm comes upon them and dashes their raft to pieces. Both heroes nearly drown. Meanwhile, we see that Wiglaf, Unferth, and the Shaper have been captured by the "Yondo sect of the T'ang tribe in the land of Pikadon." Wiglaf, now realizing that Unferth has betrayed them, vows revenge after they escape. The Shaper impresses the primitive tribe with his magical illusions, cast with the mystical phrases "Ydnic d'nabob egairram yppah!" and "Kertrats noem rofmoor erehtsi!" They agree to release the others if the Shaper stays. The others leave, but then the Shaper fades away after having vowed to be in Daneland before they arrive. Meanwhile, Beowulf and Nan-zee, having washed up on the shores of Crete, declare their love for one another. They are guided by a mysterious old man with one eye, named "The Peeper," to the labyrinth of King Minos. In the Underworld, Satan names Dracula his heir over Grendel. Grendel's mother learns of this and tells her son. Grendel vows to kill Satan in revenge. Up above, The Peeper traps Beowulf and Nan-zee in the labyrinth, and then reveals "his" true form -- the Slave-Maiden of Satan. The two heroes move to the center of the labrynth, where they fight a minotaur. The minotaur is enraged to see that Beowulf is wearing the skull of its brother as a helmet, and even though Beowulf has defeated another minotaur, Satan himself fights through this creature. Beowulf is on the verge of losing. Just at that moment, in the Underworld, Grendel plunges a stalagtite into Satan's back, killing him. Because of Satan's death, the minotaur loses its diabolical power, and Beowulf easily defeats it. He eats the fruit of the Zumak tree, and finally has the supernatural strength of Grendel. Beowulf breaks through the walls of the labyrinth, and he and Nan-zee make their way back to Daneland to fight Grendel.

It's over! It's finally over! When I started this series on the Beowulf comic, I thought it would be a fun lark. By about issue 4 I was ready to drive a minotaur's horns into my own face simply to end the misery. Though the series ends without real resolution, I can't say that I'll lose sleep at night over what might have been.
This issue is less of a mash-up than previous ones. The main change is that Beowulf is first put into Odysseus's story, then Theseus's tale. The bit about Dracula occurs in the Underworld subplot, and he makes little more than a cameo appearance.
We get some really cheesy love dialogue between Beowulf and Nan-zee, but it is way better than the first time they meet when they insult and fight each other. Beowulf confesses to her:

A prince must be hard of heart to be a strong leader ... to make the right decisions! But beneath my title lies a man, Nan-zee, a man capable of loving and capable of being hurt. There was a girl once ... when I was hardly more than a lad! She was taken from me ... horribly! It hurt! It hurt so much I swore never to let myself become weak ... never to care again!

Let me offer my own confession:

A medievalist must be a diligent reader ... to make good blog posts! But beneath my title lies a man, Wordhoarders, a man capable of being hurt. There was a DC Beowulf comic series once ... when I was only an untenured assistant professor! It was placed before me ... horribly! It hurt! It hurt so much I swore never to let myself read another Beowulf comic series ... never to suffer again!

We also get to see Grendel's mother here, and what I find really fascinating here is her hair. She looks like Princess Leia before she's had a chance to put on her make-up in the morning. 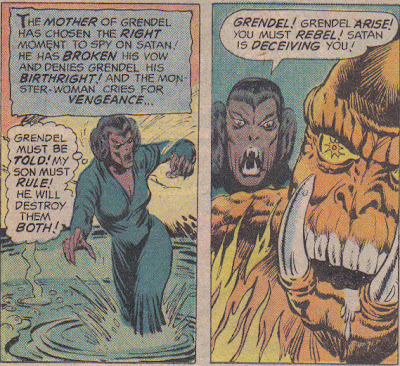 At first I assumed that the buns on the side of the head were part of the Star Wars geek culture of the time, then I realized that this issue was released about a year before Star Wars. Was there already some buns-on-the-side-of-the-head fashion in the early 70s?
Of course, the silliest thing in this issue is the death of Satan at Grendel's hands. No wonder Hrothgar couldn't handle Grendel! I've discussed before the confused and grim cosmology of the Beowulf: Dragon Slayer series, but I'm not really sure how we are supposed to understand this. Presumably Grendel would be slain by Beowulf by the end of the series. Now, Satan is dead, so in our world there is no Satan? I'm not sure why Jesus wasted his time on that whole crucifixion and salvation thing; He could have skipped the Harrowing of Hell and just whacked Satan from behind. In any case, so you don't miss it, here's the death of Satan: 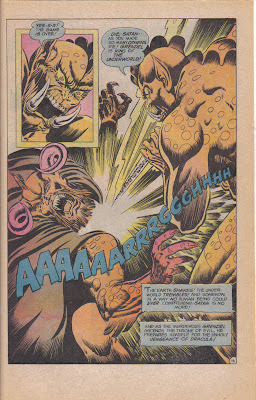 You got that? You can't ever comprehend the death of Satan, you mere human beings. See, it's like death of someone else stabbed in the back by a stalagtite, but nothing like that. TOTALLY different, see? Think you comprehend it? THINK AGAIN!

Perhaps DC Comics did not discontinue the series. Perhaps it continued the series, but the rest of the story continued in a way no human being could ever comprehend. And maybe, just maybe, this blog series will also continue in ways beyond our comprehension.