I had hoped to blog at Dragon*Con, but a variety of things prevented me from giving a day-to-day account. Here, then, is everything squished down to a single post.

This was my first trip to Dragon*Con, and I was accompanied by a friend who was entirely new to geek culture. Of course, my motives were as much business as pleasure; I went looking for eruptions of popular medievalism. Having my companion with me helped me organize my thoughts -- every time I had to explain various elements of geek culture to him, ideas took sharper focus in my own mind.
This was the most adult-oriented fan convention of any I've attended. I didn't take as many pictures as I would have liked, in part because I was a little embarrassed by the figures that would have been in the background. Lots of anime-style schoolgirl outfits, and lots of very busty pirate wenches. Twice I ran into* topless women in public areas, something I definitely have not seen at other conventions. Day activities often had an S&M subtext, and night activities were more blatant. If you want to take your kiddies to a convention, be very careful about Dragon*Con.
There was much less fantasy/medieval content than I expected, but I don't think that's the norm for this convention, because several people who had been before also commented on the lack of medieval things. Indeed, one person urged me to start a medieval track at the convention in order to rectify the problem.** The greatest medieval content was in the Tolkien track, though there was some in many other areas, such as young adult lit, fantasy, and gaming.
I met some other scholars doing very interesting things. Some scholars who had put together two books, The Players' Realm and Gaming as Culture, had a session on gaming, which they shared with a fellow who designed three experimental games -- and whose name I wrote down, and subsequently lost (sorry). They are, from left to right: Sean Q. Hendricks, the game designer and accompanying larval gamer, J. Patrick Williams, and W. Keith Winkler. 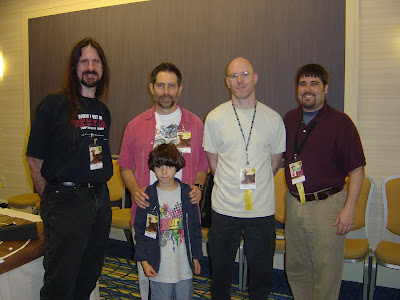 I also met some interesting SCA folks, and we talked at great length. In fact, I think the coffee I had with this couple was probably the most enlightening time -- we spent a lot of time talking about the place of medieval-themed MMORPGs and fan conventions in SCA culture. Aaron "Aedon" Winzinek and Deanna "Glenna Ruadsdottir" Smith recognized the Medieval Congress t-shirt I was wearing and stuck of a conversation. I found out that we're in the same SCA kingdom, and strangely, even though distance prevents me from really getting involved in Shire Thorngill, I felt a kind of affinity for Aedon and Glenna because we're in the same kingdom. 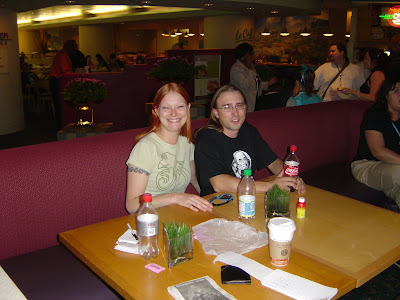 I went to some very interesting Tolkien sessions. One person in particular, Anne C. Petty, was doing yeoman's work in presenting on various Tolkien-related topics; where there would normally be a panel, there was just her trying to hold down the fort for the whole time by herself. It seems to me that if there are any Tolkien scholars out there who are interested in popular (i.e., non-boring) presentations, the folks at the Dragon*Con track might welcome you.
The costumes were phenomenal. Of course, with armories like this... 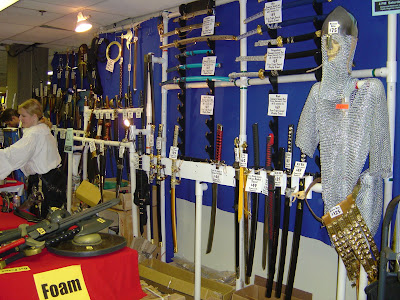 ... you would expect folks to be able to put together great costumes. You'll notice in the upper-right-hand corner of the image a Norman-style helmet for sale. I also saw someone walking around wearing a Sutton Hoo helmet, but I (foolishly) failed to run him down and get a picture. Most of the costumes, though, weren't historically-inspired, but tended to be Tolkien-inspired. For example, there were plenty of Gandalfs and Galadriels, and at least one exceptionally-good hobbit. While older folks tended to prefer the Gands and Galas, young couples particularly favored Aragorn and Arwen: 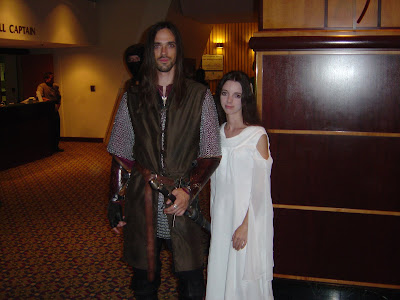 I did score at least one diplomatic victory at the convention: I brought peace to Middle Earth. Though they were reluctant to do so, I managed to convince Gandalf and a Ring Wraith to shake hands over the watchful eye of Galadriel. Compare this picture: 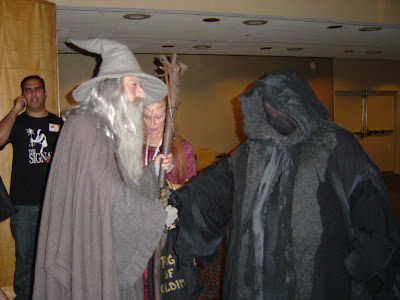 ... with this picture. I'm sure the peace will be just as long-lasting.
*Ahem ... figuratively speaking, in case you were wondering.
**Sorry, but I'm already running full out. I might be willing to participate in a medieval track, but I'm too busy to organize.
Posted by Dr. Richard Scott Nokes at 9:07 PM