An Outsider's View of the SCA

I had originally intended to write a single post about my trip the Pillage on the Plains IV, but now that I've gone, I think a couple of different posts are in order. This first one is in response to the various questions I've gotten from outsiders about exactly what the SCA is. I should note that my own experience is limited to interviewing a few people, attending a couple of business meeting-style functions, and spending the weekend at Pillage on the Plains, so this is definitely an outsider's view. Real SCAdians will no doubt have a different take, and I hope that none of my comments here will unintentionally give offense. 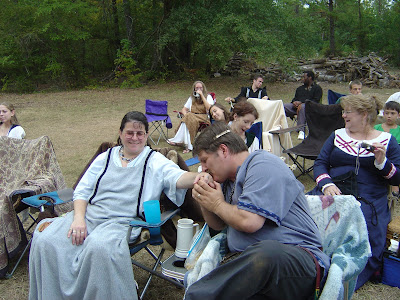 First of all, SCA is the Society for Creative Anachronism, an organization of medieval re-enactors that has been around for over 40 years. You can find their office web page here, the Wikipedia entry here, and various bloggers involved in the SCA on my blogroll. It's kind of similar to Civil War reenactors, though it's more of a mash-up of various times and places. 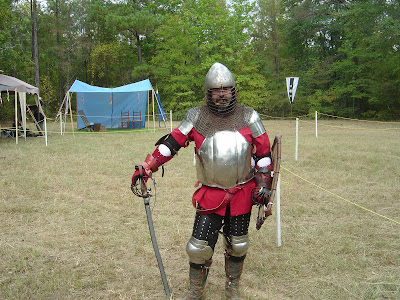 One other level of similarity with Civil War reenactors is the use of history. I've often heard American historians complain that they're accosted by Civil War buffs who know everything there is to know about the single important unit or battle their great-great-granddaddy was in, but they don't have a broader perspective. Sometimes these folks can become offended when said historian doesn't know much (if anything) about their ancestors' battles. More than once I've heard historians describe this exchange:

Buff: So, you're a Civil War historian, huh?
Historian: Yes.
Buff: My great-great-grandpappy was in the Battle of Insignificant Mudhole. What do you think about Captain Obscure's decision to flank Lieutenant Nobody's forces rather than attack from the front?
Historian: Um, I really don't know much about that.
Buff: What?! You don't have an opinion about the Battle of the Insignificant Mudhole?! Don't you know that it was the real turning point in the war, since one of the men wounded in that battle was transferred and became Robert E. Lee's shoeshine boy? After all, if not for the gleam of his shoes, Lee would have slaughtered them at Gettysburg. And you call yourself a "historian!"

My experience has been that, while SCAdians don't get angry like that when you don't know about their passion -- indeed, they are delighted with the opportunity to tell you all about it. Still, the understanding of history is similar: lack of a broad historical understanding, but a deep, deep well of detail about their areas of passion. 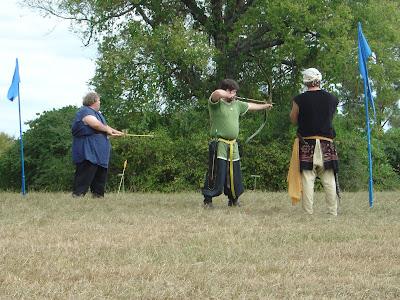 Probably the single term that carries the most force for SCAdians is period, which I take to mean something like "authentic for whatever period it is intended to represent." More than once, I heard the phrase "That's so period!" used to compliment someone on their garb or craft. Still, period can be a loaded term, with some people scoffing at others as being the "period police," mostly because they are critical when something isn't exactly right for the period. It took me a while to figure this out: If an SCAdian says "period," they might mean what anyone else would mean, but they might also be referring to authenticity as a virtue. 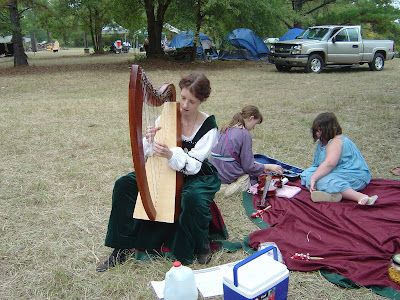 SCAdians all have a persona, or a character that they are portraying, but the level of detail given to that persona varies wildly. One of the rules seems that you cannot portray an actual historical personage, but the person you portray needs to be "period," so you can't, for example, portray Aragorn of Lord of the Rings. For some people, the persona is just a name; for example, Queen Lethrenn only has a name for her persona, and she varies the period based upon what kind of clothes she wants to wear. In other cases, the backstory of the persona is very detailed, with specific life events mapped out historically. I think the degree of leeway in terms of period can vary from kingdom to kingdom. 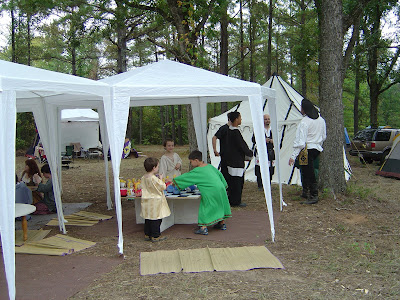 The above, with its references to a queen and kingdoms, leads to the issue of organization. The world is divided up into various kingdoms, which tend encompass several states (though it should also be noted that they do not necessarily run along state political borders). My own kingdom is Meridies. Each kingdom is further broken down into smaller club-sized groups, and the nearest one to Troy is the Shire of Thorngill. Within the SCA, people hold various offices with medieval-sounding titles, most of which are rough equivalents of modern offices such as treasurer or club president, though there are some that are unique to the SCA -- for example, Lord Richard na Teanga Mihn (my host) is the Youth Combat Marshall. Every kingdom has a king and queen, titles that are won by combat -- so in most cases, the queen is the wife of the king in real life, though this is not necessarily so, and I'm told that some queens have won office by defeating their opponents at arms, so that their husbands became king through them. These particular offices appear to be mostly ceremonial, and a monarch only reigns for 6 months before being replaced. The boring bureaucratic business of the SCA is run by a board of Corporate Officers. 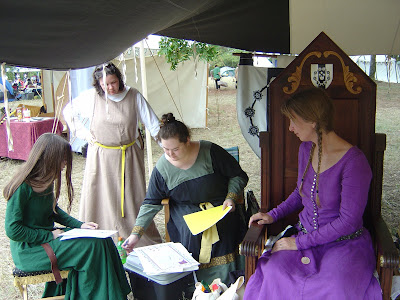 By the way, someone mentioned to me that he figured all the SCAdians would have exalted personas -- much in the same way that every Westerner who believes in past lives always seems to have been royalty, and no one ever a slave. The structural culture of the SCA, though, doesn't really allow for that. After all, you can call yourself "Charles the Frank" in an effort to emulate Charlemagne, but what good is it if someone else is King, and you don't even have a grant of arms? Instead, I found that people tended to have the personas of travellers so that they could blend two or more styles they really liked. For example, Lord Beirhart of Douglas (seen here platting rope) is a heathen Viking living in Scotland, because he didn't want to choose between Viking and Scottish styles. 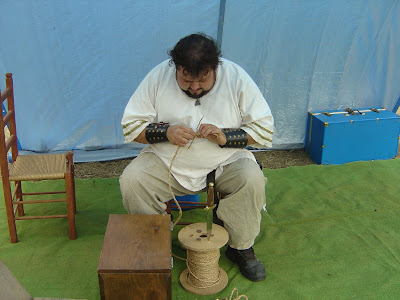 I heard lots of persona stories like that: missionary, merchant, crusader, shipwrecked, freed slave, married to a foreigner ... all these allow for the easy mixing of periods, and I found SCAdians really took to that. In most cases, I suspect that SCAdians are very tolerant of any period or region deviation as long as you have a semi-plausible figleaf in your backstory. 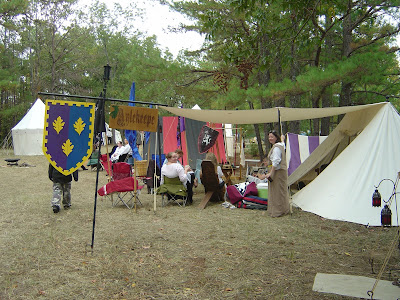 What do people actually do in the SCA? Though SCAdians tend to break the categories down differently, I would say the two main tracks are arms and crafts. People get together to fight (hard!) with lightly-padded medieval weapons. My shire has weekly weapons practice, and I think that's the norm, so these are folks who take it very seriously -- which is all to the good, because if they were just a bunch of yahoos smacking each other with swords, people would get very hurt. The arms side is what you might think: great swords, rapiers, bows, etc. 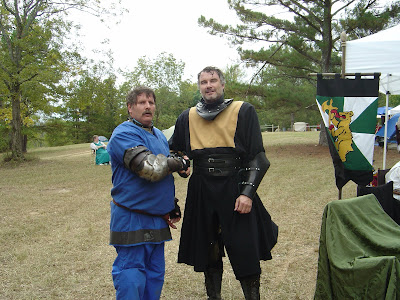 Lord Richard and Killian the Black, after sparring

The crafts side varies even more. Anything that you might consider a medieval craft -- blacksmithing, leatherworking, spinning, weaving, period cooking, dance, song, instruments, etc. -- someone is doing it. And they all take this very seriously too. You can't exactly pop down to the WalMart to pick up a suit of armor, tunic, and spinning wheel, can you? The market being so limited, they have to make the items themselves. Even the kinds of things you can find at Renaissance Faires they tend to make themselves, simply to keep costs down (this could be a VERY expensive hobby if you let it). For example, here is a picture of my kids with King Maximillian: 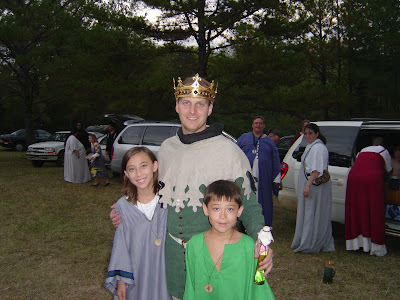 ... who made every single item he was wearing, except for his underwear. The bottle he is holding was presented as a gift from the children; it's spiced oil they prepared in the children's pavilian. The king (who must be an excellent fighter as he has won the crown three times through feats of arms) also made every single element of his fighting gear except for his boots -- but unfortunately I didn't get a picture of his very beautiful and very functional armor. 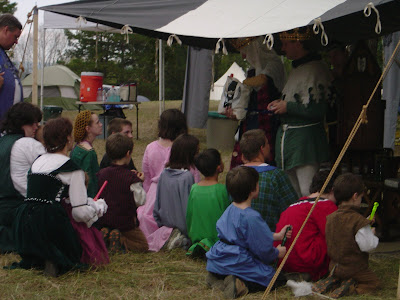 King Maximillian is a great example of how important arts & crafts are. Not only is he one of the best fighters in the kingdom, but he's also a superb craftsman. In fact, I don't think I met a single person who only fought -- everyone seemed to be a skilled craftsman in at least one area, if not several. These are really talented people. 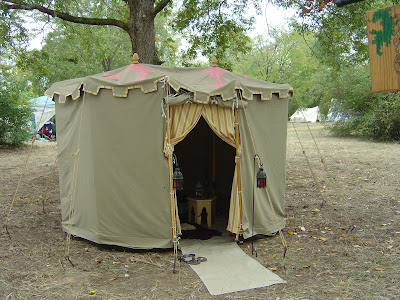 That being said, they aren't arrogant about their arts and crafts. Instead, they really want to teach you what they know. SCA would be a great hobby for someone interested in embroidery, or carpentry, etc. 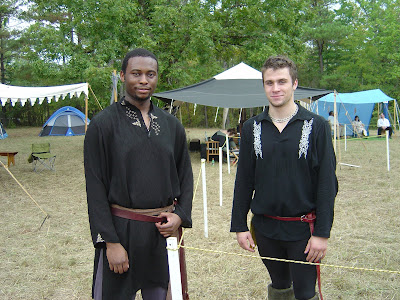 Lord T'Okin (sp?) of Zanzibar and Ian, a crusader

What about warts? In the interest of candor, I would be remiss if I didn't mention the big problem with SCAdians -- a penchant for talking when they should listen.* I had this conversation about a dozen times:

But see, here's the thing ... I was never asked a single question. Instead, people found my expertise as an opportunity to tell me things. To be honest, I didn't mind that at all -- it was nice not to have to be a walking lecturer on medieval England -- but sometimes people would launch into extended lectures that reminded me of the old adage about not teaching your grandmother to suck eggs. Several times I had to nod politely while listening to an oft-well-rehearsed and somewhat inaccurate speech about some element of medieval life. Fortunately, though, I'm not a historian so I only noticed the real howlers. 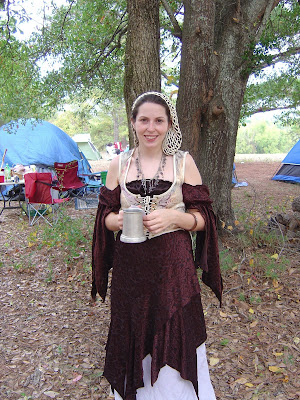 Ginny (?), another first-timer with beautiful garb from Ren Faires.

So, should YOU get involved with SCA? In my case, I first made contact with the SCA in order to build bridges between the scholarly and popular academic communities. I took my kids because I thought it would be fun for them. In my experience, for less than $100 three of us spent a great weekend camping, met fabulous people, ate a darn-near miraculous four-course feast, and wandered around what amounted to a Ren Faire without any tourists and without price-gouging vendors. Since I was a first-time visitor, we called ahead and arranged for our Shire to bring us loaner garb and plates. I can't be deeply involved with the SCA because of distance to the nearest Shire meeting place, but I would encourage anyone who is interested to look into it. I went to this event for professional reasons; I'll go to my next for pleasure.


*I know, in this case I'm the pot calling the kettle black, but I'm trying to give the fairest view I can.
Posted by Dr. Richard Scott Nokes at 12:19 PM