In an earlier post, Dr. Virago and I took a trip down Memory Lane, fondly recalling the old Fisher-Price Little People Castle from the 1970's. That castle is one of the earliest Christmas gifts I remember getting. Because we were a foster family for about 30 years, good, unbroken toys never got thrown away, and my old castle survives to this day! All the people, furniture, and animals have long since been lost/destroyed, but the castle itself stands firm.

For a look at a pristine castle with all the Little People, check out this image. The only difference seems to be that between the dragon and the coachman are a bunch of generic-looking people who I don't remember being part of that original set. Those of you too young to remember, take note -- all the people are little wooden pegs with plastic heads screwed on top. No doubt that's why dogs loved to chew on them (By the way, according to the website, someone bought that set for $128).
You can see the front of my own castle here: 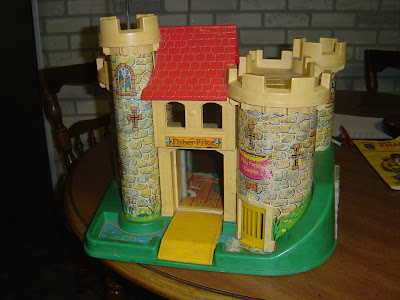 As you can see, it isn't exactly in mint condition. The moat is particularly ragged looking (though you can still make out the alligator picture if you raise the drawbridge). The poor quality of the moat probably results from the time my brother and I thought it should have real water in it; though it held the water fine, the sticker picture of the moat started peeling. The drawbridge really went up and down, which was an important part of many adventures. Sometimes the hero would be chased by villains, and would have to get through before they could catch him, sometimes an evil villain would hole up in the castle and the heroes would have to sneak in through the dragon cave to save the day.
Also, that dungeon door opened, and up above was a trap door that the Little People could fall through ... the climax of many stories would be when the hero would be losing a swordfight, would leap backwards over the trap door, and the overconfident villain would step on the trap and find himself in the dungeon.
Take note of the pre-PC days ... there are crosses everywhere. 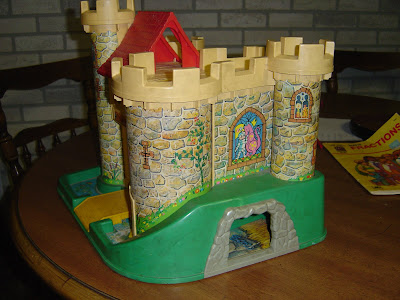 Here we can see the dragon's cave. There was a sliding door inside the castle leading to the cave. Note the bedding, as well as the iconography above -- apparently, in the happy, hippy 70's*, the dragon and the knight were friends. In our adventures, sometimes they were friends, and sometimes they were enemies. Note the vine climbing the castle wall; there's a very nice vine on the tallest tower, and more than once people scaled the sides. 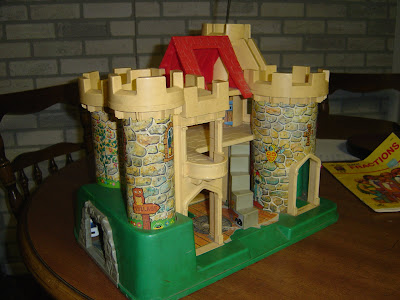 And finally, the interior. The staircase swiveled out, revealing a secret hiding place big enough for a Little Person to hide in. There was a balcony (though we never did any Romeo and Juliet scenes). The owl is sitting on a sign pointing to the village -- years later, after we got other Little People sets, the village began to take shape, and included a farm and an airport.** The owl, black cat at the foot of the stairs, and the suit of armor behind the secret stair led to many adventures in a haunted castle.

One last thing to note: When flicked, the springy flag at the top of the tallest tower would give a satisfying twang. While that was not important for any of our stories, it didn't stop us from twanging it at every opportunity. More than once the princess would escape the castle by pulling down on the flag and then catapulting herself as far as the spring would fling the little peg princess. Apparently, in my imagination, princesses were hardy enough to survive a very great fall.***

*An era that gave us such travesties as disco, Jimmy Carter, and non-violent Tom & Jerry cartoons.
**Little-known fact: Most medieval manors had an airport.
***I'm not sure what that fractions book is doing in the background, since all the kids currently living at my parents' house are either too young or too old to be studying fractions. Maybe the king and queen were promoting an mathmatical education campaign among the peasants.

Posted by Dr. Richard Scott Nokes at 9:09 AM