Some time ago I had a conversation with a student who told me that she was at a theme park where a man was giving henna tattoos. She asked him for a medieval-themed design, and he told her that he wasn't allowed to give any designs except for the approved ones in his book. He then slipped her a business card, and whispered that he did custom work under the table.
I thought this story of a black market in medieval tattoos was fascinating, particularly the idea of treating the body as a text (though that seems more like fodder for the In the Middle folks), so I posted a bleg asking for images of tattoos. I received none.
Until this weekend, that is. Now Shaun from near York, England, has sent me an image of his Templar. He's also planning to have a huge Templar battle scene across his back, which he estimates will take 40 hours to do. 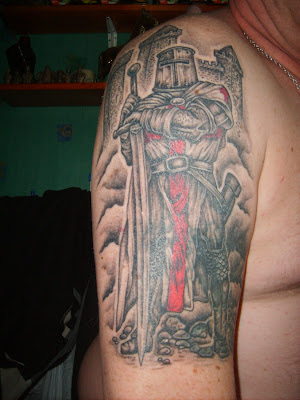 Shaun, if you're interested, I invite you to comment on your choice. Why this knight? How long did it take? Etc?
Posted by Dr. Richard Scott Nokes at 8:25 AM