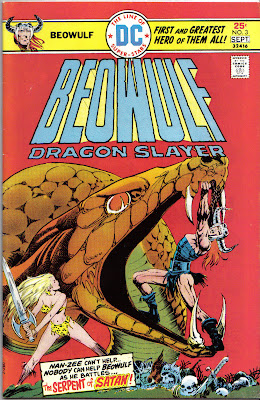 Synopsis: After being told that he would have to get the Black Viper's venom and Zumak's ambrosia in order to defeat Grendel, Beowulf and a small party set out to sea to defeat the Black Viper. The party also includes the Shaper, Unferth, and the Silent One (Unferth's demon companion). They lose one of their party, and nearly lose Wiglaf as well, when they are attacked by a sea monster. Beowulf decides that he needs advice on how to defeat Satan, and so the Shaper summons Wyrd, the God of Fate, to advise him. Wyrd tells him to "fear neither man nor demon." The party sails an island in "The Darklands," where they split up to scout the island. Unferth summons a pixie-like demon named "Little Omen," who casts Beowulf, Nan-zee, Hondscio, and the Shaper into Nightmareland, where they float around re-living their nightmares. Finally, the Shaper commands Little Omen to free them, but almost as soon as they are freed the party is set upon by pygmy head-hunters. Meanwhile, Grendel is back in Daneland killing Satan's Man-Apes out of frustration because Satan won't let him confront Beowulf yet. Grendel vows that if Satan does not send Beowulf by the next full moon, he will enter Hell and rip Satan to pieces. Back in The Darklands, Beowulf manages to negotiate a peace with the pygmies, but they attack when they learn he's there to kill the Black Viper, which apparently their chief is a god. Beowulf is able to capture the chief and negotiate a peace. He then goes alone and weaponless, again the protests of Nan-zee, to fight the Black Viper. He manages to kill the Black Viper by standing in its jaw and pushing until it cracks the jaw (much like the image on the front cover, sans Nan-zee). He drinks the venom, and plans to go next to drink the ambrosia of Zumak.

This issue is a lot less silly than the previous one, though it often doesn't make sense -- e.g. the sea monster dies in a huge, mystical explosion, dumping the heroes in the sea, but in the next page their ship is fine. Beowulf switches back and forth between a sword and a spiked mace. The summoning of Wyrd doesn't really move the plot forward, and neither does the brief stint in Nightmareland -- I found myself wondering if the book was a few pages too short in the first draft, so perhaps they through in these episodes for length? Also, we have this strange idea that no one is really afraid of Satan, since in the previous book Beowulf sliced his ear, and in this one Grendel threatens him.

There are some interesting things, though. Beowulf goes to great lengths to negotiate with the pygmies, even though these are the least threatening foes they've faced thus far. This is very different from the Beowulf who attacked Satan in Hell -- suggesting an interesting ethic for Beowulf, that he only uses violence against foes who are his match or better, and tries to make peace with those who are weaker than him.

Also interesting was the personification of Wyrd as a god. Wyrd is described as

The omnipotent god of Fate, known by countless names throughout time -- an all-seeing spirit neither good nor evil, neither just nor merciless, who does what must be done and insures that that which is, is that which must be! He is the path of life and death! He is Destiny! 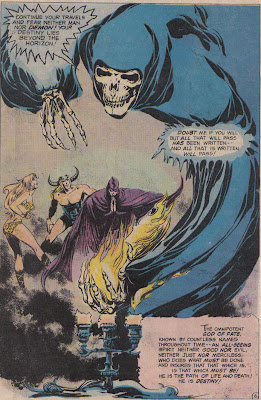 This is, at least on some level, faithful to the idea of wyrd in the poem, though one wonders why anyone would seek advice from such a god.

Also, on the Backwards-Magic-Words front, Wyrd is summoned with the phrase "Uoy taht si -- Iniduoh yrrah," and and Unferth summons Little Omen with "Yaccm ros niwot deta cided sisiht!" -- Winsor McCay apparently being a famous illustrator I'd never heard of before.

Previous posts in this series: