Scott Wegener, the executive producer for Beowulf: Prince of the Geats, was kind enough to send me an image. On the left is the elder Beowulf, and on the right is the elder Unferth (called "Hunferth" in B:PotG). You can find my original post here. 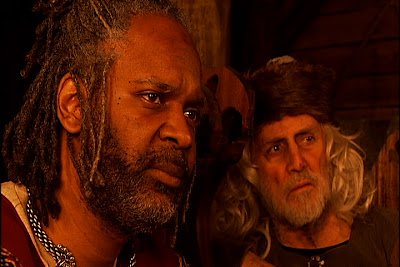 According to the official website, Beowulf is portrayed by Damon Lynch III, and Hunferth by Bob Elkins. Wegener also sent me an image of Beowulf fighting the dragon, but it didn't quite come through the e-mail right, so we might have another image for you later.

By the way, I also found an image of Grendel's Mother ("Helldam") on Deborah Smith Ford's website. Scroll all the way down -- it's the one on the bottom left side.

Posted by Dr. Richard Scott Nokes at 8:32 AM