I was at the Scout Store yesterday, buying a Christmas gift for my Cub Scouting nephew in Kenya, when I saw this display: 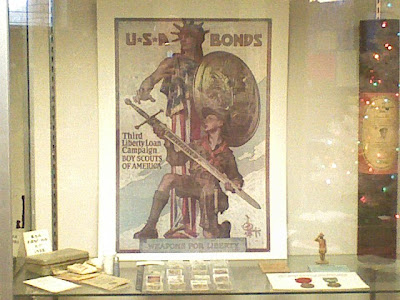 In case the text is too small to make out, at the top it says "U*S*A BONDS," in the middle "Third Liberty Loan Campaign. BOY SCOUTS OF AMERICA," and the platform upon which they are standing says "WEAPONS FOR LIBERTY." On the sword it says "Be prepared," which is the Boy Scout Motto.

I think Liberty is male in this image, though it's a little hard to tell, but male or female, the knight iconography is clear. Torch and book gone, this Liberty has a shield and sword. The scout here is depicted as a squire assisting Liberty.

I did a bit of research, and found that this poster is a WWI poster from 1918. Since the Boy Scouts started in America in 1910, I'm a bit surprised that the Scouts were already so recognizable only eight years after they came to this country (and only a decade after they were started in England). It's also interesting how quickly they adopted the chivalric image of the Boy Scout as the prepared squire of Sir/Lady Liberty.

In one article from the time, Benjamin Strong, Governor of the Federal Reserve Bank of New York, had this to say:

There is every evidence from the results they [the Scouts] have hithertofore obtained, from the earnestness and courtesy of their manner in going after these results, from the enthusiasm and chivalry of their attitude toward their important task, that their hearts are absorbed in it. They are true crusaders, these young Americans, the hope of our race.

The amounts are staggering, too. In the three drives, the scouts sold nearly $150 million in bonds -- and let me remind you, that's 1918 dollars. Those are some pretty active squires.

Pretty cool, huh? Since the image has passed into the public domain, someone is selling t-shirts of it on Zazzle.

Posted by Dr. Richard Scott Nokes at 8:52 AM